This site uses cookies to improve your user experience. By using this site you agree to these cookies being set. Click here to find out more.

We’re proud of our partnership with Carers Trust and across the Group we’re continually looking for ways in which we can further support the charity. We’re delighted to announce that Rank has gifted its sponsorship of Ipswich Town Football Club to the charity.

The Carers Trust logo will appear on the front of the club's first-team shirts at the start of the 2020/221 season, as well as on all replica shirts, including the juniors.

With over 4500 carers in and around Suffolk, this sponsorship will not only put a spotlight on Carers Trust, we hope that it will also help to drive fundraising for the charity in the area and offer much needed respite for a number of local carers who will be offered complimentary tickets to home games at Portman Road.

“Having their name on the front of the Ipswich Town first-team shirts will help spotlight the fantastic work Carers Trust does in supporting unpaid carers locally and across the whole country,” said James Boord, chief marketing officer for Rank’s digital business.

“Thousands of carers across Suffolk alone are caring around the clock for family members with long-term disabilities and illnesses.

We have also fully backed Ipswich Town FC’s decision to pay tribute to the NHS on the back of the first-team shirts for next season, with James adding: “It’s great to see both the NHS and carers receiving recognition on the Ipswich Town shirts, especially in these challenging times.”

Rosie Richardson, director of sales at Ipswich Town FC, said: “We are delighted to help Rank’s chosen charity by offering support to Carers Trust, which reaches out to a number of fantastic community initiatives.”

“Unpaid carers make an immense contribution to society but all too often that contribution is forgotten. So, we are incredibly grateful to Rank for donating its sponsorship of Ipswich Town FC to us. It means that every time the club plays with the Carers Trust logo on the shirt next season, unpaid carers in Suffolk and right across the UK will know that the care they provide to family members is recognised, respected and valued. Carers Trust sends Ipswich Town FC its best wishes for a successful 2020/21 season.” 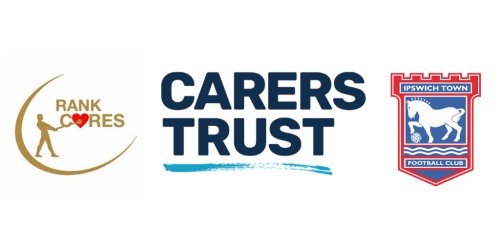